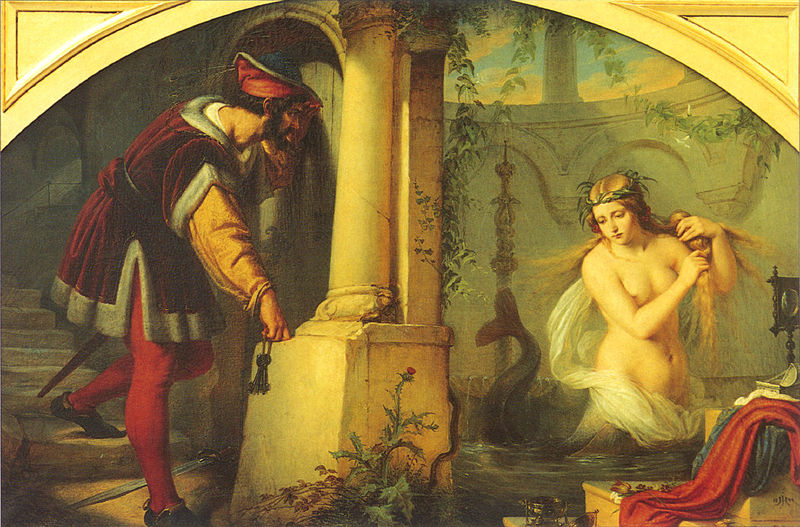 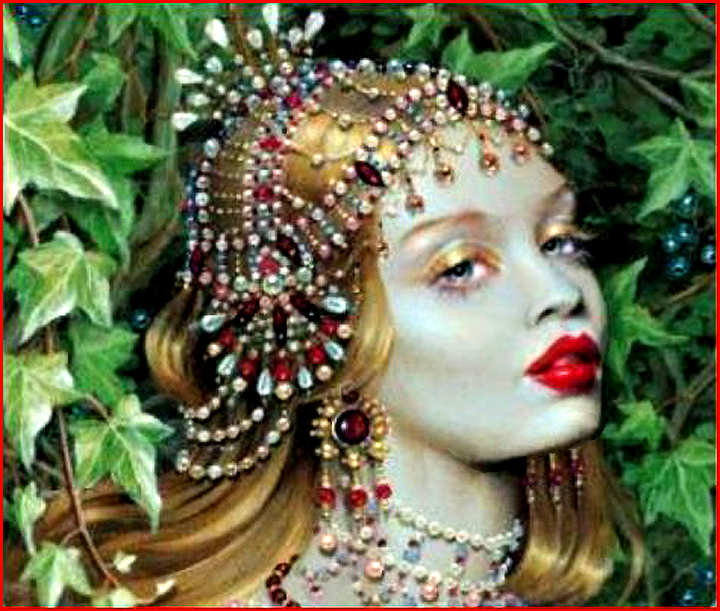 Melusina is a Water Fairy; some say the daughter of a Scottish King and a fairy mother, cursed to become a Snake every Saturday from the waist down. The royal houses of Luxembourg, Rohan and Sassenaye all claim descent from Melusine. The counts of Lusignan cliam her name signifies Mere des Lusignans 'mother of the Lusignans'.

In a French version of the tale, Elinas, King of Albania, married the fairy Pressina with the taboo that he should not witness her laying in. She bore him triplets Melusina, Melior, and Palatina, but the king, forgetting the taboo, rushed to see them, and the fairy and her daughters disappeared.

They went to the mysterious Lost Island, where the girls grew up. When they were fifteen, Melusina determined to be revenged on her father and set out for Albania with her two sisters. By magic, they imprisoned him and all his wealth inside a high mountain. Pressina was outraged by this unfilial act and cursed Melusina to become a snake every Saturday until she should marry a man who would agree never to see her on that day. Melusina wandered the world and eventually arrived in the forest of Comombiers in Poitou, where all the fairies welcomed her and made her their queen.

It chanced that Count Raymond was traveling the forest and arrived at the Fountain of Thirst, also called the Fountain of FAYS. There he saw THREE comely fairy women disporting themselves the loveliest of which was Melusina. Naturally, they fell in love and were married, with the condition that Raymond would never see her on a Saturday. Their marriage was happy, despite the fact that their children were all horribly deformed. However, it was not to last. The Count wondered why he could not see his wife on Saturday and began to suspect that she had a lover. Concealing himself in her chamber he saw the horrible truth. Before his eyes she transformed into a writhing serpent, grey, white, and blue. Still, he loved Melusina and knew that if he ever revealed that he was aware of her secret she would have to leave him.

It then came about that one of their sons, the vile Geoffrey, burned his brother a hundred monks to death as they shelterd in an abbey. As Melusina went to comfort her husband he cried out; 'Go, thou foul snake, contaminator of my race!' Thus , the entire evil destiny that had lain in abeyance came to pass. Melusina told her husband that she must leave him and spend her time in pain and misery until Doomsday. she added that when one of her race was about to die at Lusignan she would appear hovering in the air, or in the fountain of thirst.

In the Luxembourg version of the legend she married Count Siegfried, the founder of the country. In this case she was asked to be alone on the first Wednesday of the month, when she would retire to the caverns beneath the city. Inevitably, Siegfried spied on her and discovered that she became a Mermaid with a fish tail. She jumped out of the window into the River Alzette and he never saw her again. ''All over Europe there are similiar stories of men who accidently discover their wives to be mermaids.''

In Germany, Melusina is not only a water fairy but a woodland and mountain fairy as well. The German version of the story concerns a young man who lived in Stollenberg Palace. He was out hunting by the Stollenberg Mountain when he heard the voice of a woman asking him to redeem her by kissing her three times. She told him that her name was Melusina and that if he complied with her request that she would be his bride. He saw the angelic face, golden hair and blue eyes but her hands had no fingers and instead of feet a snake's tail peeked from beneath her skirts. Nonetheless, she was enchanting and he kissed her Three times. Expressing her delight, the maiden disappeared.

The next morning he went off to find her again. This time, she not only had a snake's tail but also a snake's body, a DRAGON's tail and wings. But her face was so exquisite and her mouth so seductive that he again gave her three kisses. She smiled joyfully and disappeared.

That night. He could not sleep with thinking of the extraordinary Melusina and as soon as it was light he set off to find her once more, following the sound of her sweet singing voice. But what now? Instead of the beloved face he expected she now had the head of a TOAD, lifted up waiting to be kissed. He could not bring himself to kiss her the requisite three times. In revulsion, he fled, leaving behind the fairy's cries of anguish and disappointment.

He left the district for good and married a normal girl. As they celebrated the wedding feast a crack opened in the ceiling and a drop of moisture fell into a dish of food. Anyone who ate from this dish fell down dead. Then a snake's tail emerged from the ceiling and the wedding party broke up in chaos.

Violent cries were known in France as cris de Melusine from the scream Melusine gave as her husband betrayed her. In Germany, during a storm, they say; 'Melusina is crying for her children'; and on Christmas Eve, they brush the crumbs from the table, so that Melusina might also have something to eat.

Like many Pagan deities and fairies, she has acquired the title Saint Melusina. According to Gerald Gardener Melusine was one of the names given to the WITCHES' Goddess. Her name may derive from the Breton melus meaning melodious.

Wednesday: is the Sabbath day of the fairies in some stories, not Friday. It is on this day that they have the most power, and are most often up to thier tricks.

Friday: is the day, according to Irish lore, on which fairies have the most power since it is their Sabbath day. Knives should not be shapened on a Friday, as this will make them angry. It is an unlucky day to start a new job, begin a journey, or hold a wedding, for fairies are out to cause mischeif and will spoil it if they can. It is on this day that they are most often up to thier tricks with Elf Bolts, milk stealing and Changeling swapping. On Fridays, they are also wont to kidnap young girls as brides. A fairy story told on Friday should be prefaced by the words; 'A blessing attend their departing and travelling! This day is Friday and they will not hear us.' This prevents Friday ill will coming on the narrator. According to the Gaels, Friday should not even be called by its proper name 'Di haoine' but referred to obliquely. 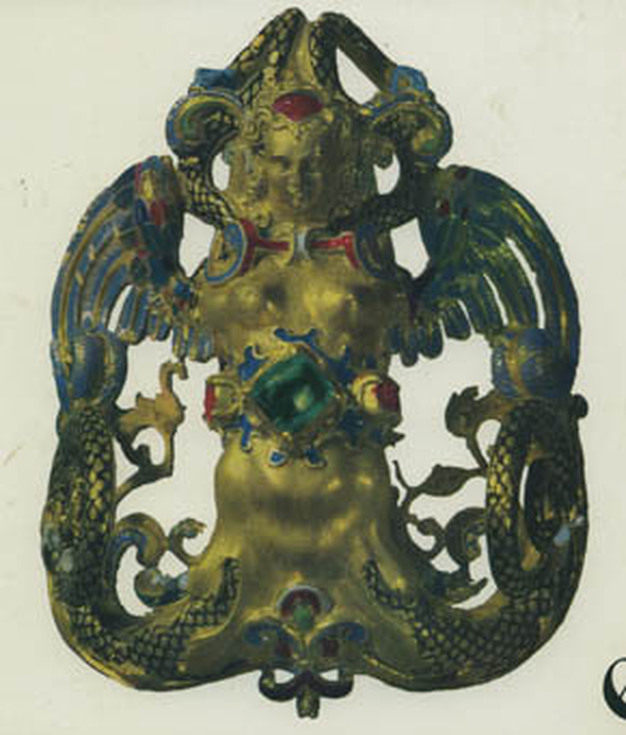 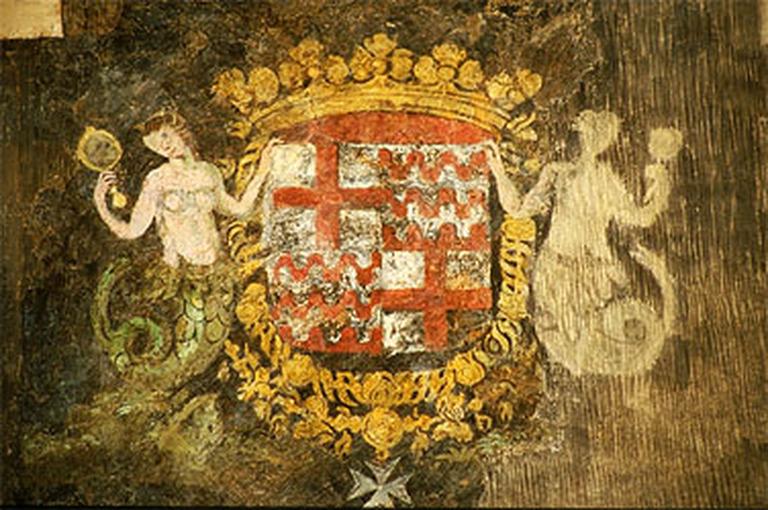 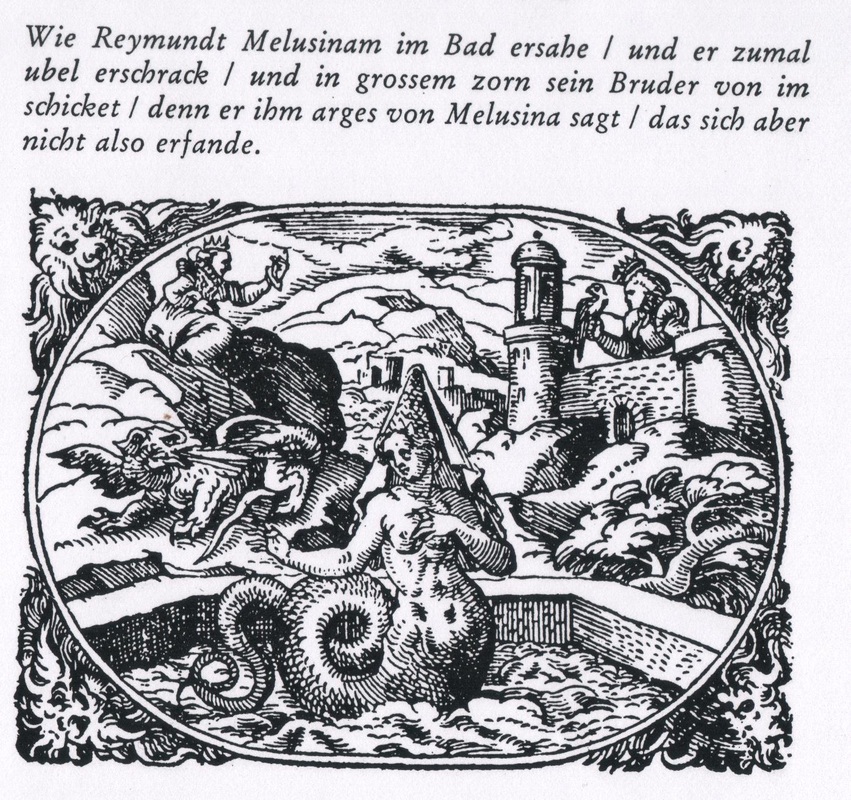 (c)2013; All Rights Reserved, Iona Miller, Sangreality Trust
iona_m@yahoo.com
Fair Use Notice
This site contains copyrighted material the use of which has not always been specifically authorized by the copyright owner. We are making such material available in our efforts to advance understanding of environmental, political, human rights, economic, democracy, scientific, and social justice issues, etc. We believe this constitutes a 'fair use' of any such copyrighted material as provided for in section 107 of the US Copyright Law. In accordance with Title 17 U.S.C. Section 107, the material on this site is distributed without profit to those who have expressed a prior interest in receiving the included information for research and educational purposes. If you wish to use copyrighted material from this site for purposes of your own that go beyond 'fair use', you must obtain permission from the copyright owner.